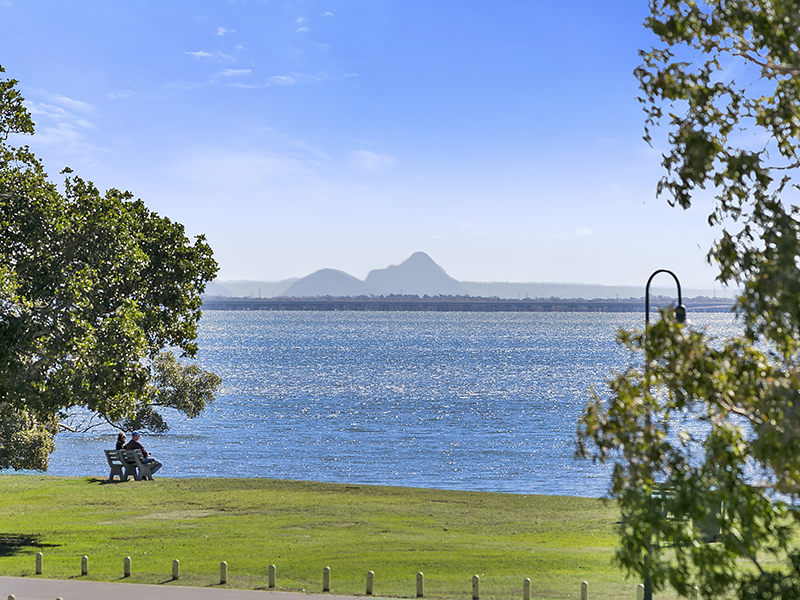 Until recently, Nudgee Beach mostly has flown under the real estate radar. That's rapidly changing, with lifestyle aspirations, the desire to achieve work-life balance and the seduction of the short city commute driving increasing interest.

To the uninitiated, Nudgee Beach may be little more than the name on a Motorway exit sign on trips to or from Brisbane's northern suburbs or the Sunshine Coast.

Those who know it, however, relish its many charms, from dog owners who love the opportunity to exercise their furred friends at the dog beach and dog park, to boaties who launch their vessels from the new jetty, and anglers, of course, for whom Nudgee Beach always has been a happy hunting ground.

Golfers, too, are fans of the area, able to satisfy their particular obsession at the championship Nudgee Golf Course, just three minutes away. And then there is the legion of savvy cyclists who make the Beach their regular pit stop. Kayackers and windsurfers are other colourful visitors and a growing number of families are laying claim to the parkland and foreshore as their favourite playground.

There was a time when the area was known as much for its clouds of mozzies as it was its glorious bay views. But thanks to the ongoing efforts of the Brisbane City Council, mosquitos and Nudgee Beach no longer go hand-in-hand. Ironically as well, changed airport flightpaths have had a similar positive impact.

Nudgee Beach is still a sleepy pocket where racehorses from nearby Ascot and Hendra are taken to exercise. But like a teenager transitioning to adulthood, its complexion is changing.

Under 30 minutes in peak hour to the centre of the city, and close to prestigious schools and a university, it had to happen.

Real estate in the suburb has been tightly held for many years and more often than not, houses have been passed from one generation to the next. There are still some original beach cottages, definitely showing their age, but renovation and renewal is in the air. A growing number of million dollar plus homes sit quietly, and perhaps smugly, overlooking the Bay, and an increasing number of middle-aged beauties are being given rejuvenating facelifts.

Pam’s Café with its friendly staff, good coffee, traditional snack food and some Vietnamese specials, is still the only shop at Nudgee Beach. It is likely to stay that way for a while due to strict local area planning regulations. However shoppers and foodies are more than catered for in the area.

Apart from upmarket Racecourse Road, Chermside and Toombul Shopping Centres are a hop and a skip, and the DFO complex and 24-hour Woolworths are just five kilometres away, near the airport. And then there's the increasingly gentrified, nearby suburb of Banyo, with its award-winning Putia restaurant, plus Japanese, Indian and just about everything in between around  the newly opened Woolworths complex. On Sundays, markets at Eagle Farm racecourse and Nundah offer additional culinary temptations.

For those in the know, Nudgee Beach is a lifestyle and real estate gem. The question is, how long before it is a very bright spot on the radar? Watch this space...

Don’t miss the boat purchase your slice of paradise today. Here's an example of the luxurious lifestyle you could lead in Nudgee Beach - Click here!